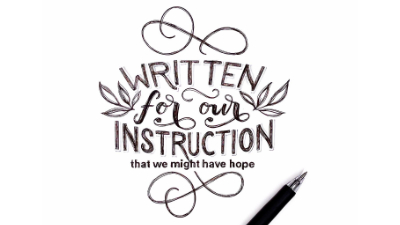 An essential part of our Bible study is to understand that the word of God was written for us. It is a personal letter to you in this very day and age. Aaron joins Tim to discuss many different passages that relate to us that the Bible is so much more then a history book.

For further reading get a copy of Our Sure Foundation by the Christadelphian Magazine.

Key Verse “For the word of God is living and active, sharper than any two edged sword piercing even to the division of the soul and spirit  and of joints and marrow and is discerning of the thoughts and intentions of the heart” (Heb. 4:12)

And you know this is a description echoed throughout the bible…Peter in fact uses the same description. In 1st Peter 1 vs 22-25 he writes, “born again through the word of God which lives and abides forever“. It’s a powerful adjective….That we wouldn’t often attribute to most literature (when we think of living we think of something relevant and pertinent/ex. A book written in 1850 may not age well/ its message becomes old… perhaps stagnant).

But before we get into what exactly this characterization of a living word means, I think its important to preface why this is so important…because how we understand God’s word to be written, in many ways directly effects how we understand the Bible, and how we choose to read it as a document! Some Christians believe parts of scripture are irrelevant and outdated etc. So its really a fundamental thing to take the time to understand, how God’s word is intended to be received by us?

And I think what we will find as we take some time looking at this, is that the bible is actually fairly clear on how it was written and fairly transparent in how its word was intended to be received by the reader

Start by looking at how the Bible elaborates on this idea of a living word, and we can start by keeping ourselves in this same chapter 1st Peter 1 (is one of those overarching verses that I would suggest encompasses the way scripture was intended to be received).

With Peter, who seemingly has a lot to say on how the Bible was written, in vs 10- 12 “the prophets have inquired and searched carefully …but to them it was revealed that not unto them but to us they were ministering” (powerful statement for Peter to make here…100’s upon 100’s of years after these things were written, the ministrations of the prophets were written for his time!).

We see an example of what Peter is referencing in Daniel 12 vs 9 don’t we? (it wasn’t for Daniel to understand all the things he wrote/ the word of God was for those who were to come/ wrote things often incomprehensible to themselves because they wrote to a future generation).

We have David in Psalm 102 vs 19 “This will be written for a generation to come, that a people yet to be created may praise the Lord” (the words and meditations of the psalms were written for generations to come!)

And to appreciate the significance of these statements is to appreciate how far off it would be to suggest the writings of these inspired writer’s to be irrelevant, or outdated, or that they’re writing with the misconceptions of their day…(that’s an accusation often leveled at the Old Testament).

(Paul elaborates on this) Romans 15: 4 “for whatsoever things were written aforetime were written for our learning that we through patience and comfort of the scriptures may have hope”.

Continue in 1st Cor. 10 vs 6- 11 “now all these things happened to them as examples but were written for our admonition”.

But if anything is evident from these verses, it’s primarily that they were not concerned with their day…they were communicating messages that would have a greater relevance to future days!… often writing things incomprehensible to themselves.

All of these examples work to paint a picture of God’s word that reflects that description of a living word/ timeless principles and stories (in other words it’s messages and principles are unmarred by the cultural influences of it’s day as many authors of scripture had little understanding of what they wrote) that we can take lessons and exhortation from.

Now all of this reinforces the idea of an inspired word, but I would really suggest there are two ways you could define a divinely inspired word.

We could suppose it to be …a verbatim account of what God caused to be written by special men centuries ago, leaving us a word which is profitable for instruction when we read it….or, while admitting this…we could take this understanding a step further… and when we do we come to a powerful conclusion….

Word of God speaks to us! We use the present tense deliberately because these words spoken and recorded thousands of years ago are purposed for us the reader…The Bible is God’s dialogue with us…We often think of prayer in this way don’t we but how often do we perceive scripture to be the same?

We have talked about a lot tonight, we have considered the character and the nature of Gods word…It’s a word whose principles and stories are as applicable now as they were thousands of years ago, it’s a word that has the power to prick the heart and conscience of the reader, but above all we are left with a picture of a word that is addressed and personalized to us. God’s word is like a personalized letter to us.

Hebrews 3:7-8 “Today if you hear his voice, Harden not your hearts”. Today was still today, and present when the letter to Hebrews written, and so to does those words speak to us! Now is the day of opportunity, Gods word is a living word, and we must be alive to its message.